Colmer always opts to render the vitality and the natural power of the language rather than slavishly copying the rhymes, alliterations, and meanings. In the epilogue, Claus’s Dutch colleague and friend Cees Nooteboom asks to be haunted by him once in a while, as he is by this collection.

The full review can be found here.

JS: Can you say a word or two about the place of Claus in Dutch letters and in translation before this volume?

DC: If you talk about post-war Dutch-language literature, writers who emerged after the war and dominated the new literary scene for the decades that followed, Claus was clearly the leading Belgian and on a comparable level to the “Big Three” in the Netherlands: Hermans, Reve and Mulisch (Hermans has been picked up recently but Reve still remains virtually unknown in English). The difference between them is Claus’s enormous range and productivity; he produced so much in so many genres that, in Flanders at least, it’s hard to overestimate his cultural importance. A number of his novels have been translated into English and been critically well received, but his poetry has had a much more marginal existence. There was one book-length collection, but that stayed pretty much under the radar, and otherwise the poems have mostly appeared in fairly minor journals and magazines. Coetzee did include a series of Claus’s poems in Landscape with Rowers, his anthology of Dutch poetry, and I think that was the one notable exception in terms of getting Claus’s poetry into the public eye in English.

It’s always a surprise when presidents or kings or prime ministers or otherwise powerful heads of state reveal a poetic side. Sometimes it’s laughable, but other times — considering they were probably busy dealing with things like the defeat of the Spanish Armada or mending the wartorn homeland — the poetry’s not so bad. Here are two of my favorite examples from English:

The Suicide’s Soliloquy
by Abraham Lincoln

Here, where the lonely hooting owl
Sends forth his midnight moans,
Fierce wolves shall o’er my carcase growl,
Or buzzards pick my bones.
No fellow-man shall learn my fate,
Or where my ashes lie;
Unless by beasts drawn round their bait,
Or by the ravens’ cry.
Yes! I’ve resolved the deed to do,
And this the place to do it:
This heart I’ll rush a dagger through,
Though I in hell should rue it!
Hell! What is hell to one like me
Who pleasures never know;
By friends consigned to misery,
By hope deserted too?
To ease me of this power to think,
That through my bosom raves,
I’ll headlong leap from hell’s high brink,
And wallow in its waves.
Though devils yell, and burning chains
May waken long regret;
Their frightful screams, and piercing pains,
Will help me to forget.
Yes! I’m prepared, through endless night,
To take that fiery berth!
Think not with tales of hell to fright
Me, who am damn’d on earth!
Sweet steel! come forth from our your sheath,
And glist’ning, speak your powers;
Rip up the organs of my breath,
And draw my blood in showers!
I strike! It quivers in that heart
Which drives me to this end;
I draw and kiss the bloody dart,
My last—my only friend!

Pretty dramatic. But since he’s Abraham Lincoln, we’ll let it slide. Another, which, taken with the title, really strikes me:

Much suspected by me,
Nothing proved can be,
Quoth Elizabeth prisoner.

That titular image — the avian Queen scratching a royal jewel across the window — sets a particular lonely and ridiculous mood before we even reach the poem.

The closest we’ve come to presidential poetry in this century are, shockingly, from George W. Bush. His bizarre self-portrait paintings leaked onto the internet some time ago, and, as arts blogger Greg Allen so astutely observed:

The amazing thing is not just that they literally show Bush’s own perspective—but that Bush is using the process of painting to show his own perspective. It’s a level of self-reflection, even self-awareness, that seems completely at odds with his approach to governing.

They may not send ripples through the contemporary art world, but they do seem to speak to the emotional life of a public political figure, a rarity. And in this case, to eerie effect. A poet is, before anything else, a person who is passionately in love with language.
— W.H. Auden, The Complete Works of W.H. Auden: Prose: Volume II. 1939-1948

In addition to his own verse, Auden translated a number of works into English, including the Mozart libretti The Magic Flute and Don Giovani. For Auden, opera libretti sat firmly with the European poetic tradition.

If you’re going to engage with English poetry, a mentor once told me, sooner or later, you’re going to have to deal with Pound. She was referring, of course, to his controversial–and often, downright bigoted–remarks both on the page and beyond. But frankly, few modern English poets have influenced as many writers as Pound. That his work continues to resonate with successive generations poses a particular  challenge in the narrative history of American verse.

Pound recognized the need for international literature to enliven the language, incorporating untranslated text from other languages into his poetry and even translating whole works (see: Enrico Pea‘s Moscardino). Avoiding the mode of stiff, word-to-word translation, Pound followed his ear, sometimes creating a translation that was outrageously loose — but gorgeous.

And then went down to the ship,
Set keel to breakers, forth on the godly seas, and
We set up mast and sail on that swart ship,
Bore sheep aboard her, and our bodies also
Heavy with weeping, and winds from sternward
Bore us out onward with bellying canvas,
Circe’s this craft, the trim-coifed goddess.

My favorite example of his translation skills is in his “Canto I.” The majority of the poem is a loose translation of a brief episode from Homer’s Odyssey. Notice the trios of alliterative words and vowel-sounds at the beginnings of each line. Rather than follow Homer’s dactylic hexameter meter, which doesn’t work in the same way as it does for Ancient Greek and Latin, Pound chose to set the poem in a similar meter as Beowulf. Pound saw his task beyond translating the words: he translated the meter, from one language’s epic tradition to another.

For those in the know — or willing to Google the reference — Pound admits toward the end that he isn’t translating from the original Greek, but from a 1538 Latin edition translated by Andreas Divus.  Pound’s resulting creation feels like a direct address to the Art of Translation, its wonders, its pitfalls, and its importance.

Check out all of Canto I on the Poetry Foundation website here, with a great recording of Forrest Gander giving his thoughts and reading the first section.

“The poet’s extraordinary productivity was achieved in the face of personal tragedy, persistent ill healthy and systematic persecution” 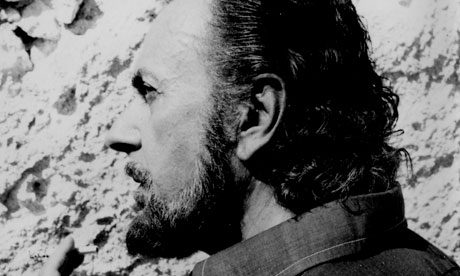