Patrick Lannan, whose dedication to supporting the arts during his tenure as president of the Lannan Foundation from 1986 to 2021 helped us to publish so many transformative works of literature in translation here at Archipelago Books died Wednesday July 27 in Santa Fe, New Mexico.

An obituary in The Santa Fe New Mexican highlights Lannan’s lifelong commitment to supporting “the writers and artists and activists who lived on the edges.”

As the writer Terry Tempest Williams writes of Lannan: “He had an elegance of mind and a fierce and tender understanding of what supporting artists and activists and Native communities meant to the soul of America.”

Bob Martin, who ran Lannan’s “Readings and Conversations” series, called him an “extraordinary man” whose work with the Santa Fe series was “transformational.”

We are so excited to share recordings of conversations between celebrated authors, translators, and creatives over the past few weeks!

Hear Archipelago author Ida Jessen, translator Martin Aitken, and Désirée Ohrbeck revisit the steps of the creative process that culminated in A POSTCARD FOR ANNIE, from Jessen’s introspection to Aitken’s approach to translation. Big thanks to Third Place Books for hosting this conversation!

Also tune in to a thought-provoking conversation between translator Phil Roughton and broadcaster Doug McIntyre as they discuss SALKA VALKA and how Nordic literature has evolved throughout history. Huge thanks to Scandinavia House for hosting this event!

We’re delighted to share a recording of a conversation between an award-winning translator Tess Lewis, and Trevor Berrett and Paul Wilson of the Mookse and the Gripes podcast, discussing some of their favorite Archipelago titles, our mission to bring world literature to English speaking readers, and the joys (and terrors) of translating another author’s work.

A big thanks to Odyssey Books for hosting the event! 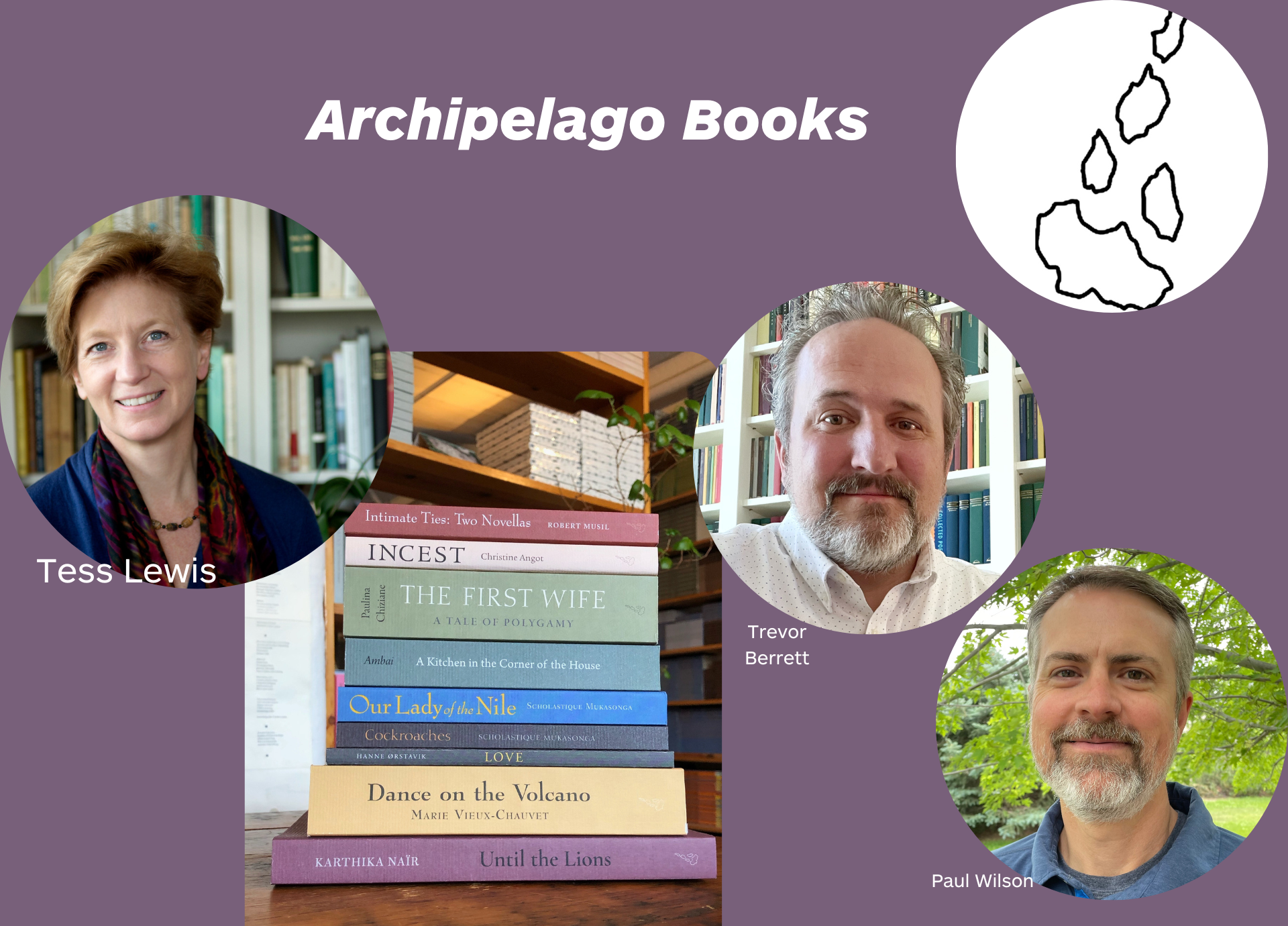 Our 2022 online Art Auction for Elsewhere Editions is now live on our website! Join us to bid on fantastic works of art by Bruno Miguel, Nkechi Ebubedike, Anna Bjerger and more! We are thrilled to share an essay about Maja Haderlap’s work, written by Tess Lewis, the translator of Maja’s Angel of Oblivion and distant transit. Published by Poetry Society of America, the essay delves into Haderlap’s experience of living between two countries, two cultures, and two languages. Tess Lewis discusses how belonging to the borderline shaped the subjects and ideas of Maja’s writing. You can find Lewis’s essay, alongside excerpts from distant transit, here, and read some excerpts below:

Angel of Oblivion portrays family dynamics poisoned by war and torture and interwoven in it is an urgent reflection on storytelling: the narrator hopes to rid herself of the emotional burden of her past and to tell stories on behalf of those who cannot. She can only exorcise her community’s inherited trauma by recounting it and in doing so help resurrect their collective memory.

the house that shelters me breathes imperceptibly.
has a timbered roof that billows like a sail,
has an outer layer that is not rigid. you hear
me living inside it, you ask what i’m doing,
grumble when i remain silent and weep. in the house
of love, everyone builds their own little cottage,
one for themselves and another for a third.
i will no longer give in to persuasion. my ribs
have congealed into a fan vault
that barricades me in. you can hardly
detect me, i’m so distant from you.
at night, my old desire makes a racket
deep in the keel. I float inwards, where love
couples with the foreign, to the cape
of hope, my throat taut.

Maja Haderlap’s poems shed light on the richness of human experience. Hers is a poetry of transitions, charting the move from one country or language to another, from adolescence to adulthood, from trust and intimacy to distance, from rootedness to estrangement, but also from estrangement to a sense of community and home.

We’re excited to share that Archipelago translator Geoffrey Brock has been recognized with the inaugural Joseph Tusiani Translation Prize for his rendering of Giuseppe Ungaretti’s Allegria. Established by the Journal of Italian Translation, the prize honors English-language translations of Italian works which best embody the life and legacy of pioneering translator Joseph Tusiani. tion to the significance both of Ungaretti’s work and Brock’s translation: “Allegria, never before translated in its entirety, is the central work by one of the two or three greatest Italian poets of the twentieth century. The radical minimalism of its style makes it notoriously difficult to re-create successfully in English. Brock has everywhere met this challenge through a measured and thoughtful recasting of each poem. His English versions capture the essence of Ungaretti’s style and vision, while standing independently as satisfying works of art.”

Brock’s Allegria was also awarded the 2021 National Translation Award in poetry. In addition, Brock is the author of three collections of poems and the editor of the FSG Book of 20th-Century Italian Poetry. His translations of Italo Calvino, Roberto Calasso, Umberto Eco, Umberto Saba, and others have appeared in Poetry, Paris Review, and The New Yorker, and he has received awards and fellowships from the Guggenheim Foundation, the Academy of American Poets, the New York Public Library’s Cullman Center, and the NEA. He teaches in the MFA program in Creative Writing and Translation at the University of Arkansas.

Archipelago translator Elizabeth Harris was also recognized as a prize finalist for her excellent work translating Andrea Bajani‘s If You Kept a Record of Sins.

We’re grateful for the existence of prizes that champion the importance of translators and translated literature, and honored to be recognized as a facilitator of such a mission. Congratulations for this wonderful honor, Geoffrey!

Archipelago Books is enormously pleased to have been featured on The Mookse and The Gripes podcast! On each episode of the show, co-hosts Trevor Berrett and Paul Wilson have a pleasant conversation about books and reading. On this week’s episode, they talk about Archipelago Books, including some recent releases and old favorites.

Kjell Askildsen, who was born in 1929 and passed away in 2021, is widely recognized as one of the preeminent Norwegian writers of the twentieth century and among the greatest short story authors of all time. He entered the literary scene in 1953 with the collection of short stories From Now on I’ll Take You All the Way Home, which received glittering reviews in the Oslo press, but was banished from the library in his home town, for immorality. It was not until 1987, after the publication of A Sudden Liberating Thought, did he receive critical acclaim. Askildsen has since received numerous literary awards, among them the Norwegian Critics’ Prize (1983 and 1991), the Brage Honorary Prize (1996), the Swedish Academy’s Nordic Prize (2009), and in 1991, he was nominated for the Nordic Council’s Prize for Literature. In 2021, Archipelago published Askildsen’s Everything Like Before, a luminous collection of stories that captures life as it really is. Its pages feature a man and a woman in a quiet, remote house, an old man on a park bench, an estranged brother in a railway café – characters surrounded by absence. Filled with disquiet, and longing, they walk to a fjord, they smoke, they drink on a veranda, they listen to conversations that drift through open windows. Small flashes like the promise of a sunhat, a nail in a cherry tree, or a raised flag, reveal the interminable space between desire and reality in which Askildsen’s characters are forever suspended. Please join us in celebrating the life and achievements of Lee Fahnestock, who passed away earlier this year.

Lee Fahnestock‘s first published translation, The Making of the Pré by Francis Ponge, was published by Indiana University Press in 1979. Since then, Fahnestock wrote and collaborated on many critically acclaimed and widely-read translations, including an enormously successful re-translation of Victor Hugo’s Les Misérables and a multi-voliume collection of Jean-Paul Sartre’s letters, edited by Simone de Beauvoir. She served as the president of the American Literary Translators Assocation from 1991 to 1993, and was a longtime member of the PEN Translation Committee. Her translation of Francis Ponge’s Mute Objects of Expression was published by Archipelago Books in 2006. She is survived by three sons and three grandchildren.

Lee was a beloved member of the literary translation community, and a steadfast advocate for translators and literature in translation. She will be dearly missed. We are delighted to announce that Ambai has won the prestigious Sahitya Akademi award!

Established in 1954, the Sahitya Akademi award is an annual prize conferred by the Sahitya Akademi, India’s National Academy of Letters, for the year’s most outstanding original work published in any of more than 20 major languages recognized by the academy. Ambai has won this year’s prize for her story collection, Sivappu Kazhutthudan Oru Patchaiparavai. She is the fourth Tamil woman to receive this award.

C.S. Lakshmi, writing under the pseudonym of Ambai, is a feminist Tamil writer. She was born in 1944 in Tamil Nadu, and grew up in Bangalore and Mumbai. She received her PhD from Jawaharlal Nehru University and her stories have been translated into five volumes entitled In a Forest, A Deer, Fish in a Dwindling Lake, A Meeting on the Andheri Overbridge, The Purple Sea, A Night with a Black Spider, and A Kitchen in the Corner of the House (Archipelago Books, 2019). Her writing touches on societal perceptions and the understanding of one’s self, family, sensitivity, and love and its restrictions. Other non-fiction works include The Face Behind the Mask: Women in Tamil Literature (Vikas, New Delhi, 1984), An Idiom of Silence: An Oral History And Pictorial Study of Art, and Consciousness and Women in a series entitled Seven Seas and Seven Mountains.

Please join us in congratulating Ambai on adding the Sahitya Akademi award to her long list of literary achievements! Consider picking up a copy of Ambai’s A Kitchen in the Corner of the House today!